Just a side note. I had no idea that the Smack Down is a wrestling thing. I Googled images. I may not recover. In lieu of that, I'll put an adorable never give up picture in here. Because sometimes you have to come at a problem from a different angle and with a new plan. 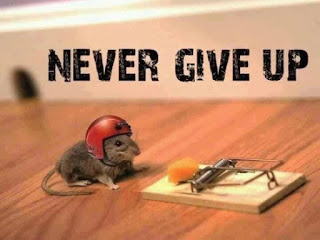 The past six or seven months have not been easy on the writing front. For whatever reason, I'm having a hard time moving any project forward. It took way more effort than I thought it would to get Fractured Memories out and into the world. I was supposed to have three short stories finished by the end of this month, and only one of them is on a second draft, while the other two are hiding from my wrath-which is to say the ranting that I do every time I think about fixing them.

Life has been busy, things come up, I've had some health issues...blah, blah, blah.

Yesterday, I decided that I was finished making excuses for myself. It was time to just do this thing.

I work the best with plans. Plans that have been broken down into smaller sections.

For instance, I can't just say that by the end of August, I will have one short story ready to be published, another in the second round of revisions and the third in a first round of revision.

Sure, that's a simple goal. Right?

Uh, no. No because there are lots of steps that have to be taken in there.

The first short story, the one I do indeed wish to have ready for self-publication by the end of August, doesn't just need a light revision. I sent it to beta readers a while ago, and got some good (as well as harsh, but needed) feedback from them. Since then, I've been doing some world building, and some re-plotting. In order to get it up on Amazon on Sept 1st, I need to revise it, then send it to a few more beta readers. Get it back. Revise it. Send it to an editor (hopefully I can find someone who is good but isn't going to charge me an arm and a leg), get it back and revise it again. I need a cover and all of the junk that goes inside of a book...and then it might be ready.

So instead of just saying I want it ready to go, I have to break it down. One week I will do all of the revisions that I have now. I'll slave away until it's finished.

Oh, in all of this I have a co-authored project that I need to get 6 more chapters out for. One a week all month long and then some.

Plus, I can't ignore Instagram any longer. I need to get on there and see if I like it and if it would be a good platform for me as an author. I don't love Twitter, and Facebook is dying.

So, there you go. I have a new plan. (Not exactly as laid out above, but you get the idea.)

As will always happen in life, something is sure to blow up tomorrow and try to knock me totally off track. It might work, but I'm going to do my very best not to let it. Because if I'm going to be an author, I need to write stuff!

I'll report back the first week of September and let you all know how I did.
Posted by -Jo- at 5:00 AM

Nice to find so much inspiration here !!!