Lately, I’ve been trying to delve into my character’s heads a little more.  Everyone has quirks, and finding out how they got said quirk is usually a nice little tidbit for a story.

I was packing for this trip, and my boyfriend was “helping.”

Okay, he did actually help quite a bit. However, he was reading my list to me so I could grab everything, and he kept stopping and asking questions about stuff. I had  to justify my list!

“Earplugs?”
“Uh, my traveling companion (not him, this trip was planned before we started dating) snores like a chainsaw.”
“Ah.”

“Duct Tape? Really?”
“Uh yeah.”
“…”
“Hey, you NEVER know when you’re going to need some tape. Seriously.”
“Okay.”
(I wrap a few feet around a pencil. The pencil is wood and can be used to stake vampires. Or write a message, or you can use the tape.)

Point in fact, we’re still  on our first leg of plane rides, and we’ve already found uses for the tape. So don’t make fun!

These are the cool things that make your characters real people. Why does your main character always carry a dollar’s worth of quarters in his pocket? Or why does she keep floss in her purse? Or what’s with the padlock?

Each character in your story should have these awesome quirks. Because, let’s face it, we do in real life. And fiction is just an extension of real life, with a few really great twists and turns.

So delve, get into your characters bags, pockets and suitcases. Become a stalker. They’ll thank you for it.
Posted by -Jo- at 5:00 AM 1 comment:

I get the best writing ideas when I travel. I don’t know what it is, but I look around in the airport terminal or on the plane, and see more stories than I could tell in a life time.

For instance, while making my way to my rear-ish seat for the first leg of our flight to Israel, I thought about the people who were already comfortably seated and watching me as I wandered by with my back pack, pillow and “personal carry on item.”

Someone might be on their very first plane ride. There are a few kids onboard, so this is likely. But there could be an adult for whom this is their first ride as well. If so, why? Do they hate flying? Never had the money before?

Perhaps this is someone’s first time out of their own state. Or someone’s first trip to New York.  Or, as is my case, where is everyone headed after New York? If a super virus got let loose through the air system in this plane, how far would it travel in the next 24 hours? I’m going to Israel. Who knows where others are headed.

On the opposite spectrum, perhaps this is someone’s last flight. They may know they are dying, or it could happen unexpectedly. This could be the last time someone will see a loved one. Or there could be a handful of people going to funerals.

What about international adoptions? Business trips? Family obligations? Vacations? The list goes on and on. Then you start delving into who each of these people are, and why they are here, and what else is going on in their lives, and you just might get a story or two worth telling.

My mind always tosses in some sort of super-natural element, which makes things really interesting. Are there guardian angels sitting on the wings? Will someone time travel back before we all got on board and thwart a terrorist plot? Is there a wizard on board who can’t control their powers?

Sorry, it’s the geek in me that goes off like that.

There are stories all around us. Even better, there are bits and pieces of stories littering the world like dust, ready to be picked up and put into your latest novel or short story.  So take the time to look around and see what’s going on. You might find a bit of inspiration you’ve been waiting for.
Posted by -Jo- at 11:00 AM No comments:

A few weeks ago I got to travel to Mesa Verde, Colorado. 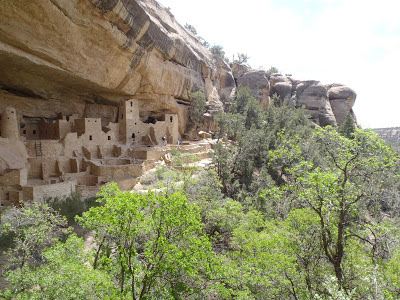 (My boyfriend has some family there, so we went on the premise of a visit, but really I wanted to see the awesome cliff dwellings. Please don't tell him.)

I love ruins. I love to hear all of the possible scenarios that the historians and such have come up with as to:

I've had the opportunity to see Machu Picchu in Peru, Chichen Itza in Mexico, old places in England and Europe as well as some ruins near Cozumel, Mexico. I listen to the tour guides and eat it up!

I maybe should have been an archeologist.

So as I'm sticking my head in a window in the cliff dwellings in Mesa Verde, I get the greatest idea for a story. What if the spirit from someone who lived there is trying to communicate with us now, and they choose a random tourist to drag back into their time so they can fix something that's gone catastrophically wrong?

Okay, the idea is better than that, but that's the gist.

As as I'm climbing the ladder of death to get back to the top of the plateau, I start to think that in some ways, I am an archeologist.

I'm a fantasy and sci-fi writer. I take ideas and pictures in my head, and I flesh them out into an entire belief system, magic system, cultural issues and in some cases, an entire world. Sometimes beyond into a universe.

I have to ask myself the same questions that an archeologist does. That list above? I totally ask myself all of that. And then some.

And to me, that is some of the funnest part of the writing process. Creating a world out of a raw idea, and building a culture on a few key points that I want in a story, is both exciting and rewarding.

Heck, just look around your house, try to imagine you've never seen anything quite like it, and start to fill in the blanks. Which rooms did they live in? How many people lived per structure? Why is there an extra house at the end of the house? What lived in there? Did they worship these black screens? How did they communicate with their neighbors? What did they eat? How did they get food?