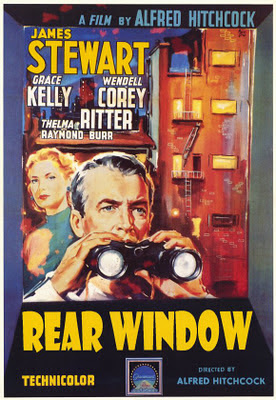 I've never seen this movie before. Yes, yes, I know, I'm behind. WAY behind. I like it that way—keeps people's expectations low. I did see the Birds in High School. Ugh.

So anyway, my roommate ordered it on Netflix and we got the disc tonight. (No, please don't go into the Netflix rant with me. My roommate is in charge of that.) After a rather painful trip to the gym, I made some dinner and we settled down to watch it.

Old movies are always entertaining. It's like going to a different world—one that's not totally dissimilar from ours, but enough to be distracting sometimes. When James Stewart pulled out a phone book, and actually used it, I mentioned that if we had kids they might not know what a phone book was for. Besides using as a booster seat, that is.

I liked the movie. I knew the story (hello, the Simpsons spoofed it) so there weren't any big surprises, but I still enjoyed it. Good characters, plenty of suspense, a little romance, great setting . . . fun, fun, fun.

Although, we were confused by two things. Why sit and watch someone who supposedly killed their wife with your lights on, and why doesn't a big, tough man like that have a gun handy? Seriously, Mr. “I travel the world and eat stuff that you wouldn't even like to look at before it's dead” (or whatever) doesn't have a firearm handy? This is America, for crying out loud! And really, turn your lights off. Spying 101 there people.

Okay, I'm making fun, but I still found myself curled up on the couch, arms around my knees, biting my lip as the girl climbed up the fire escape into the murderer's apartment.

Next on our Netflix list is Disturbia. Haven't seen that one either. Good Halloween-ness going on here. Anyone have any suggestions for more Halloween movies that aren't all gore?
Posted by -Jo- at 9:08 PM

Some of my favorites for Halloween are:
Salem's Lot
Something Wicked This Way Comes
House of the Long Shadows
Psycho
Abbot and Costello Meet Frankenstein
Young Frankenstein

They're all oldies but goodies and remind me of growing up.

Last year, we watched House of the Long Shadows on YouTube. It was chopped up into tiny bits, but at least I was able to show my kids one of my favorite films that I thought I'd never see again. And it has ALL the old horror legends in it.

Okay here is a list I pulled to gether. Don't know rateings only that these are entertaining watches.

Something wicked this way comes- it's my fave scary.
Watcher in the Woods - is an OLD Disney that still spooks me.
1956 Body Snatchers
Wallis and Gromit: Cures of the Were-Rabbit
Lost Boys (What are you the flying nun?)
Young Frankenstein (puttin on the ritzzzzzz)
ARMY of Darkness! (Ramming Speed!)
Bed-knobs and Broomsticks
Beetlejuce ( this thing reads like stereo instructions)
Buffy the Vampire Slayer (And now you're a coat rack)
Blood and Donuts
Mars Attacks

I want to add that I don't like "scarey" movies so my list is a little skewed if you were looking for things like Exorcist, or the Grudge, or, Blair Witch.