Ever play that game Balderdash? You know, the one where you get a word and have to make up a meaning for it. Words like egalitarian, remonstrance and, well balderdash.

I’m terrible at this game. Horrible. Not because I don’t know what words mean, nor is it because I’m not quick enough to make up a reasonable definition for a word. No, the problem is that I can’t lie. I have no poker face. 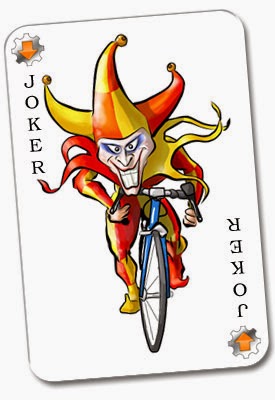 How bad, you ask?

I swear it’s genetic. In my blood. Hormonal. Maybe there’s a pill for it.

Allow me an example.

My husband and his family love to play games. Strategy games. Hard games. Games that pit the players against each other.

Now I’m not a huge fan of such games, but I’ve learned to enjoy them, or to at least enjoy the time spent with the other people playing. I’ve even won a few times. I know, crazy.

But there’s this one game. Battlestar Galactica. You may have heard of the game or watched the old TV show or the new one. Trust me, the old one is like a triple decker grilled cheese sandwich with extra cheese. The new one is odd. Both are cool in their own rights.

In the new version of the TV show, the Cylons look like humans and a few of them are running around in the human fleet. Some of them don’t even know that they’re Cylons.

So in the board game, the first half has all of the players working together against the Cylons and all of the other problems in the fleet.  However, you each get dealt a loyalty card. This happens twice in the game. One card states that you’re a Cylon. Surprise.

My husband’s family is ruthless at this stuff. They start accusing one another before anyone has even had a turn. They throw one another in the brig just for spite. One of them is an interrogator for crying out loud. Pretty much, I’m totally out of my depth.

The first time we played, I got dealt the Cylon card half way through the game. Yeah, they all figured it out before I got a turn to play. I can keep my mouth shut, I can chatter. Heck, I can probably be in the other room and they would know.  Maybe they can smell it.

I had a plan the third time. I just kept saying, “Why yes, I am the Cylon” whenever anyone asked me about it. Then I got the Cylon card and someone asked me and I said, “What? Me? I don’t know what you’re talking about.”

I broke my own system. Because I can’t lie. It is both endearing and pathetic. In games, mostly pathetic.

The thing is, I don’t even want to be the bad guy. The other two in the family are DYING to try to kill all of us with boarding parties of robots that destroy all humans. Why me?

I swear it’s a curse. Or some universal law that I have mocked and am now being punished for. This seems to be as bad as or worse than the dice problem that I have.

Seriously, what did I do to deserve this?

Granted, I won the second time around. All humans were eradicated as the population counter ticked down to zero. Go me.

But I’m still trying to figure out how exactly those odds work. 2 out of 3 games with four players and I’m the one who gets to be a Cylon. Twice.

As this was going on, I was thinking about writing (because when am I not thinking about writing?) and it came to me that a character will have flaws that they can’t really fix. They have bad luck or can’t lie or can’t hold their liquor or whatever. And the universe of my plot is going to exploit that exact weakness/problem.

Wait. I just figured it out. I’m a character in a novel.

Hey, why don’t I have super powers? This is a lame novel!