Pretty sure you've all met Johnny Worthen on this blog before. He's a strange chap that insists upon wearing tie-dye shirts no matter where he is or what he is doing. As a matter of fact, near the end of The Finger Trap the main character, Tony, sports his own tie-dye shirt. (Don't think I didn't catch that, Johnny.)

So, I know Johnny. He's a great guy and a (I might choke on this) literary writer. If you know me, I'm a commercial fiction girl. To each his or her own-I go one way, Johnny goes the other. A few months ago he asked (okay, begged, because that's what we authors really want for Christmas, our birthdays and every Thursday) for people to review his new book, The Finger Trap. 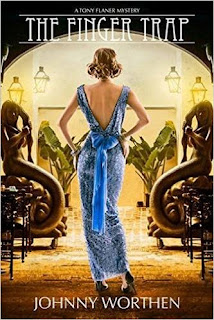 First off, the cover is awesome. Jolly Fish Press might not boast a big office or Brandon Sanderson as one of their authors, but their covers are top notch. I'm neither a literary fiction or a mystery girl, but the cover was enough to get me to agree to read it.

I'm not the audience for this book. There's more language than I like, and the pacing is a little slow (remember, I'm a blow things up now and ask questions later kind of a girl). It took me quite a while to get into the story. The main character starts out as a charming loser, with the charming barely overpowering the loser at the beginning.

However, and this was a big surprise for me, between the beautiful writing, the quirky voice of Tony and the transformation he goes through, I must admit that by the end I was actually cheering for the guy. Not the jump out of your chair and fist pump, but the sly smile of, "Oh, these guys are in so much trouble, Tony is going to take them apart piece by piece."

And he does. Not physically-he's not much of a fighter as illustrated by the number of times he gets beat up in the book-but mentally. He uses his strengths to pick the mystery apart, gather the pieces and put them back together in a brilliant ending.

Oh, did I mention he's been framed for the murder of a girl he barely met, he just went through a divorce that's been scheduled for six years and he's not a finisher?

Well, in this story he finds his reason to finish something. Which is why I'd recommend it. Like I said, some of the language and subject matter isn't what I would normally pick up and read, but I know that plenty of people don't mind it, so go read the book. The care the author put into the prose is apparent from the first chapter, the voice of the character is dry and funny and kept me going when I thought the story was a bit slow, and Tony's transformation is one of the best character arcs I've read in a long time.

If you want to stalk Johnny, go here.
He loves adoring fans, even if they chase him with sharp objects.