The Brand Demand and the Guy Who Wrote It.

Hey everyone,
Today we are hosting the, ah, er, umm...one and only (because the world can only handle a single copy) Johnny Worthen.

Seriously, if you've met him there is no short description, and if you haven't, hold on to all of your bits and pieces.

Although if you have a short description, leave it in the comments. I'm curious.

Johnny has a handful of books already published. None of them are the same flavor. Which is pretty much awesome. His latest baby is: 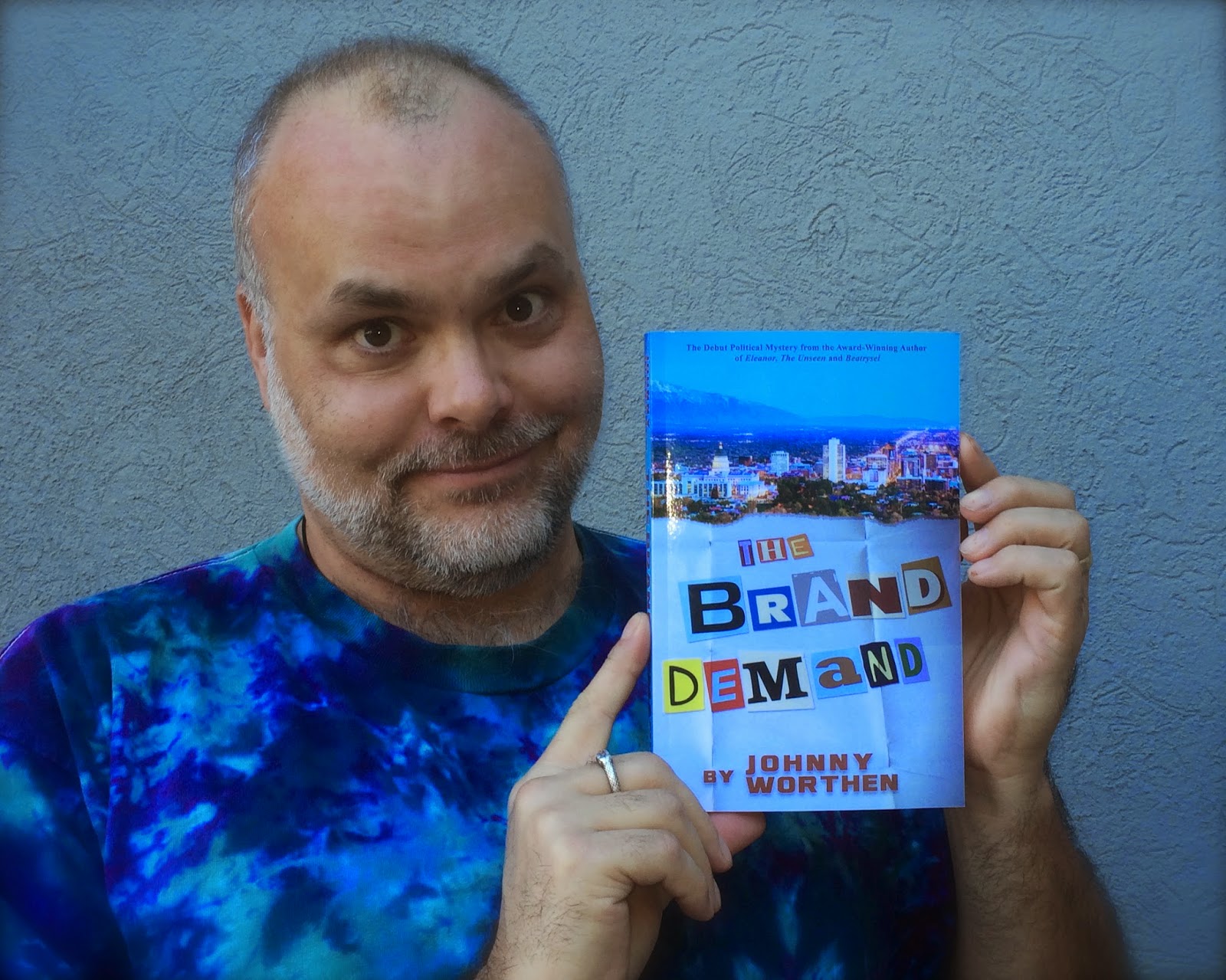 As usual, I sent him some highly personal questions to answer. Although I held off on anything having to do with the bathroom or bodily functions. Mostly to spare you.


1-Write down the next four thoughts you have. (I'm just trying to demonstrate your acute and somewhat epic ADD)

1— I’m sick of this song. I should change it.
2— Where’s the remote?
3— I spend too much time looking for the remote.
4— Come on! Where’s the goddamn remote!

2-Let's say you are king of the world, what one food would you purge from planet Earth?

3-Would you support Pay Per View combat rounds in the Senate? They have to fight it out in order to speak on the floor? They get to choose weapons—thumb wars, swords, Q-Tips...

4-What is the most frightening aspect of Southern Utah Romance Writers? There must be a story here.

G rating. It’s not tantalizing, it’s not titillating, it’s trying and tame. Give me flesh!

6-What get rich quick scheme tempts you the most?

7-How did a political thriller make it to the top of your to write list?

The politics is mostly motivation. It reflects the frustration many left leaners feel in a very conservative environment. It was born out of the Prop 8 debacle in California and the terrible Bush years we’ve yet to recover from. It’s a story about a person who holds strong beliefs but holds them without a tether to the world he’s trying to protect. Galen Reed, the protagonist, limits himself emotionally and intellectually as he fights a Robin Hood crusade against toxic hypocrites and unfettered capitalism. It is ultimately a character study of loneliness and purpose, two of my favorite themes.

8-What was the best part about writing this book?

I’ve always admired Edward Abbey. When I became a writer, I wanted to do something like he had done and create a mythology of resistance. THE BRAND DEMAND gave me a chance to connect with his MONKEY WRENCH GANG a little bit. Different times need different tactics, but both gangs are fighting for what I think is right.

9-So, why should we read your book? Hmmm? (This is the part where you dazzle us with your rapier wit.)

THE BRAND DEMAND is an adventure/mystery. It’s about bad guys who are good guys and one guy who meets a gal. It’s got high stakes and local color. It has an eclectic ganga and a sex scene that makes me blush. It challenges both sides of the political spectrum and is a page-turning read. It’s very cool.

10-What's next? Following your career is like riding the Tea Cups—you never know where you'll end up.

This is a hat-trick year for me. First, I have THE BRAND DEMAND now. In July, CELESTE, THE UNSEEN BOOK 2, hits the shelves. That’s a thrill right there. And in the Fall, I have the start of what I hope to be my signature series, THE FINGER TRAP, a Tony Flaner mystery. It’s a comic noir, full of social commentary and mid-life crisis.

Next year, DAVID, THE UNSEEN BOOK 3 will hit and I’m shopping a handful of other titles hoping to break into the big five. I’ll be attending and presenting at writers conferences as much as I can to pick up clues and leave a few. I’m living the dream. Wish me luck

If you would like to as Johnny any questions, mock him or (and this would be better) say hello, here are the many ways he has given the innocents of the world to stalk him:

And if you're now dying to read THE BRAND DEMAND, click on the title and go thee forth unto Amazon!

Look at that face.
Don't let it fool you.